Bad Night For All Parties in Gainsborough East By-Election

Liberal Democrats in West Lindsey were breathing a heaving sigh of relief last night as their candidate, Cllr. Mark Binns, emerged as the winner, just, of the By-Election for the vacant seat on West Lindsey Dsitrict Council within the Gainsborough East Ward. 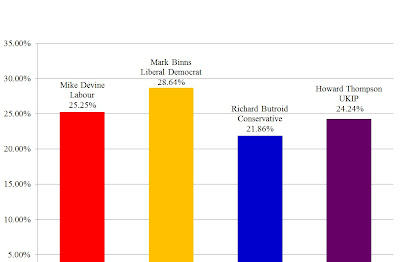 The By-Election was called for Thursday, 14th February 2013 following the death of Cllr. Mel Starkey, Liberal Democrat (Gainsborough East), who passed away at the end of October 2012.

However, there was little comfort, or good news to be taken by any of the four parties contesting the seat.

The Liberal Democrats who had a commanding 56.6% of the poll when last contested in 2011 dropped 27.96 percentage points losing nearly half their supporters. Cllr. Binns also has one of the smallest majorities of any of the thirty-seven district councillors. He equals that of Cllr. Bridger, Liberal Democrat (Market Rasen) as both men have majorities of 20. Only Cllr. Darcel, Independent Group (Fiskerton), Cllr. Dobbie, Liberal Democrat (Gainsborough North), and Cllr. Patterson, Conservative (Scampton) have smaller majorities – 19, 19 and 10 respectively.

Meanwhile Mr. Mike Devine, the Labour candidate, faired badly. Widely expected to win, he came second, with the Labour vote down by 10.35 percentage points compared to the average poll from 2011. In spite of this failure, some consolation was provided in a swing of nearly 19% to the party, from the incumbents.

The United Kingdom Independence Party candidate, Dr. Howard Thompson, came third in the contest. He did considerably better than predicted, directly preventing a Labour victory. UKIP did however slip from the second place which they achieved in the Lincolnshire County Council elections in 2009, for the divsion which covers the same area as Gainsborough East and some of Gainsborough North wards.

Mr. Richard Butroid, the Conservative candidate, had little to console himself with ending in fourth position. The party’s poll remained relatively static, when compared with the average poll from 2011, up 0.66 percentage points. The performance was better than predicted. However stoic Conservative supporters in the area, the changes in the electoral geography of the ward have left the party in a worse position.

Swing: 18.81% from the Liberal Democrats to Labour