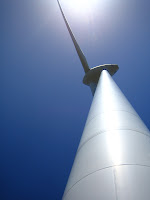 After some considerable discussion Cllr. Roger Patterson, Conservative (Scampton Ward) moved refusal of the application on the grounds that it was inconsistant with local planning policy. Specifically that because development should protect the environment, with regard to the impact on the character, appearance and amenities of neighbouring, and where relevant, other land, including visual encroachment into the countryside (STRAT 1), the construction of two turbines was not consistent with local planning policy. It was the view of the committee that  that the development would have detrimental impact on skylines and important views (NBE 10) and the development would detract from the rural character of the settlement edge and the counrtyside beyond (NBE 20).