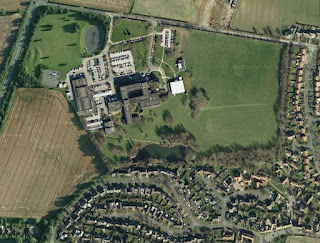 Nettleham Parish Council, tonight, held over two hours of discussion and debate on a proposal, brought forward by Lincolnshire Police and G4S, to build a replacement to the West Parade Police Station, in Lincoln, at the force’s Headquarters site on Deepdale Lane, Nettleham, with a firm resolution to oppose the current plans.

All twelve Parish Councillors were in attendance. At the beginning of the meeting, so that, subsequently, it would be possible for anyone to know how the Parish Councillors voted, Cllr. Giles McNeill called for all votes taken to be recorded votes, under Schedule 12 Section 40 of the Local Government Act 1972.

Proceedings began with a presentation by Cllr. Young and Chief Constable Rhodes. Cllr. Young hightlighted that this was not a ‘done deal’ and that they were very much at the beginning of the process. In difficult fiscal circumstance the police authority ‘would rather invest in police officers and not in buildings’. Cllr. Young confirmed that the new facility would operate as the the main operational divisional headquarters for Lincoln and West Lindsey.

The Chief Constable made it clear that G4S would be providing only back room, support services, saying:

“Lincolnshire Police is run by the Police, not G4S”

Seeking to reassure the meeting the Chief Constable said:

“I choose my words carefully. This is not a done deal. We look forward to a sensible conversation with our neighbours. However, we will not discuss any other sites or commercially sensitive matters.

“I used to live on All Saints Lane, I still have a pint in the Black Horse Pub, This is our village too.”

It became clear during the course of the discussion that the proposal was for a significantly more substantive facility than merely a custody suite with 30 cells, but in fact is a replacement for the majority of the West Parade  facility.

Following the presentation a question and answer session took place with residents and councillors participating, broadly the questions were hostile to the proposals and many went unresolved. Cllr. Hill made a substantial point, having been the chartered engineer, who in the 1970s, working for Lincolnshire Laboratories investigated the site and published a report that it was unsuitable for development for various reasons, primarily because the site is a formally uncontrolled public tip with unknown contaminants, possibly vehicles with varying depths.

A number of residents raised concerns over the release of those detained at the site, which, at the conclusion of the meeting, it was felt had not been sufficiently addressed by some councillors.

Cllr. McNeill raised concern about the plans were being done to tie the hands of the Police and Crime Commissioner, expected to be elected on Thursdsay, 15th November 2012. Cllr. Young informed the meeting that the Police Authority were conducting ‘business as usual’.

Prior to the debate by the Parish Council, Cllr. Young and the Chief Constable left the meeting.

Each Parish Councillor commented on the outlined proposals. Cllr. Evans, having reviewed a considerable amount of the relevant planning documentation considered that the ‘proposals fail on a number of levels, sustainability and edge of a settlement development’ contrary to many established policies. Cllr. Siddall highlighted that this was not Nimbyism, it was an objection based on the depth of feeling in the village and the concern over the impact of the proposal, particularly the traffic on Deepdale Lane and the A46. Cllr. McNeill raised his objection, referrring fellow councillors to Planning Police Statement 23 Annex 2 (Contaminated Land)

Cllr. Downs stated his view that  we should ‘applaud the desire to improve facilities and minimise costs’ but that as times move on, requirements alter. He believed that ‘there are a lot of problems associated with this development and it really should be sited in a much more urban area’. Cllr. Hill made one of the most damning crticisms stating that:

“Others [developers] have been open, honest and frank. They have not answered the questions we wanted to know.”

Cllr. Spencer concurred saying ‘I think they are not being truthful’.

“Here we are again, finding ourselves up against another unwelcome intruder – and it’s the police!

“This will turn them into the neighbours from hell. Not this. Not hear. Please Don’t make us pay the price.”

The Chairman of the Parish Council, Cllr. Williams, echoed the comments of his fellow councillors however he wanted to make mention that the Parish Council recognises the enormous task the Chief Constable has in policing the county. He said he was ‘completely opposed to the current formulation of the proposal as previously outlined’.

The Chairman proposed, seconded by Cllr. McNeill and the Parish Council resolved that:

“The Parish Council request that Lincolnshire Police Authority defers any further action in relation to this Project until the new Police Commissioner has been appointed;

“In any event, meaningful dialogue needs to be held with the Parish Council before any decision is taken to submit a planning apllication; and

“In the meantime, the Parish Council is opposed to the current proposals as formulated by the Lincolnshire Police Authority.”