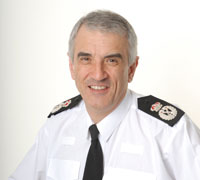 “Mr Chairman, thank you very much for the opportunity to speak to the Parish Council and the residents of the village about the prospect of building an operational police station on our headquarters site here in Nettleham.

“I choose my words carefully, and say ‘prospect’ because for us this is not a done deal, but further development at the headquarters site is a strong option. We are very much here to listen, and look forward to a sensible and intelligent conversation with a community that in the past has always been strong supporters of the police.

“What we won’t be discussing in detail are alternative options we are or have considered, or commercially sensitive reports or costs. We are here to listen to your views on the viability and suitability of this site.

“So let me set out the issues for you as we see them. Lincoln police station, at West Parade, serves the city and the wider West Lindsey area, supplemented by a number of smaller stations, probably the largest being at Gainsborough. Officers working from there include roads policing teams and several other teams that serve the wider area – and yes, including 22 busy cells.

“The building is old, tired, expensive to run and needs a lot of money spending on it. It’s far too big for us now and chunks of it stand empty. The location is poor. It’s okay for town centre foot patrol, but vehicle access is really difficult – it’s a really choked up spot. It’s not a friendly place for the public.

“We need to separate out, the town centre team and cars and put them in a far more publicly friendly place, right in the heart of the town centre, preferably shared with other agencies, accessible to the public.

“We need all of the back office support, booking on and office facilities, interview teams, custody facilities, traffic teams etc to be in a good strategic location, within a modern, sustainable, economical building. We have explored alternatives. With a very tight budget you can understand why developing an existing police base, that’s 60 seconds from the bypass and on the main A46 arterial road really seems to fit. A base that has a lot of land, that we own, and which is already connected to the police IT infrastructure we need.

“With any planning application there are many issues, the site, the appearance, traffic flows, changes of existing use. In this case the one consistent message we are hearing from residents focuses on the handling of prisoners and the potential release of prisoners on the edge of a beautiful, tranquil village that is a very low crime area indeed. Many of you came here just for that reason. I can understand those concerns and that they are genuinely held. You will get no accusation of NIMBYism from me.

“In addition, you have raised concerns with us in relation to the viability of a build in the preferred position on site, as it is the location of an old quarry, and also raised concerns about footpaths needing to be redirected. We are looking into both of those issues, but should either prove a real problem, this is a very large site and the building could be accommodated readily in an alternative location on it.

“When dealing with your concerns what I hope to do is try to offer some measure of reassurance, reaffirm we are listening and that this is not already decided.

“Of prisoners released, what is their motivation to visit and cause trouble in the local housing estate? Most just want to get home ASAP. Existing facilities service not only Lincoln but the whole of West Lindsey. We have a duty of care to people we arrest; we don’t just turf them out miles from home, with no transport or means of getting back. Family and friends collect, solicitors help, interviewing officers returning to their area help. That’s just business as usual for us. In addition, in this case, we have built in transport arrangements that will see prisoners taken and released back at Lincoln bus and rail stations where that is sensible and appropriate.

“I’m sure someone will point out that once you’ve finished your investigation and charged a person you have to bail and release them. You can’t just keep them for another couple of hours until transport is available. Quite right. But if we think they are likely to cause problems and commit offences in the immediate area on release, that’s grounds to detain or impose stringent bail conditions. The proportion of people, backed by their solicitor, insisting on immediate release, whose transport arrangements we are not happy with and who have the intention to offend immediately in the Nettleham village, well you work it out for yourself – it has to be very low indeed.

“Bail backs (people who are arrested and later have to return to a police station) that will be dealt with at HQ site, most will have driven there and will drive away. Many now will be dealt with offsite or by postal charging. BUT, transport back to Lincoln centre is there for them too.

“So, in summary, there is a need to replace the main police station that serves this area, Lincoln and wider West Lindsey. It needs to be in a good strategic location for that area, not land-locked in town. We have an existing police site at Nettleham that fits the requirement and which we already own. It has to be a strong option on cost alone. We are exploring the viability of planning consent. We are talking with and more importantly listening to local residents. In due course we’ll make a full report to the Police Authority, who will debate the matter in public, and who will also listen to your views, before they decide, balancing the whole case for the good of the wider area, what course to pursue.

“In the meantime, this meeting is neither the start to our conversation with residents, we have had two open days in the village hall already, nor is it the end. We want to discuss this further. I know there is a really strong and well organised group calling themselves SOLVE who fiercely oppose this development. I met last week with one person from that group and I would like to talk more. We are open minded, prepared to listen to argument and evidence, I’d like to think you are too. The offer is open and genuine.